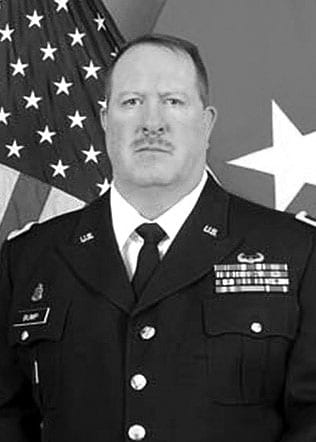 Thomas P. Bump was born in Albuquerque, New Mexico.  He enrolled in New Mexico Military Institute in 1985 to pursue an Associate of Arts degree.  Bump excelled in all areas of leadership during his time at the New Mexico Military Institute being recognized on the Dean’s list and receiving the Distinguished Military Student Senior Reserve Officer Training Corps award.  Bump continued his education with a Bachelor of Science degree in business management from the University of Phoenix and a master’s degree in strategic studies from the United States Army War College.

Brigadier General Bump has held additional key leadership positions throughout his career, including command of the first Infantry Battalion in New Mexico.  BG Bump was selected to train, mobilize and lead a group of New Mexico National Guard soldiers on a deployment to Afghanistan in 2008 as Commander of Joint Force Headquarters-Forward 17 Regional Police Advisory Command – West, Regional Command Advisory Group Embedded Training Teams.  Upon return from his combat deployment, BG Bump commanded two out of the three brigade level major commands in the New Mexico National Guard.  This included the 515th Regimental Regional Training Institute and culminated as commander of the 111th Maneuver Enhancement Brigade.

After Brigade Level Commands, BG Bump was selected for promotion to Brigadier General and assigned as the land component commander in charge of all New Mexico Army National Guard units and later served as the Director of the Joint Staff for the New Mexico National Guard in charge of preparing all New Mexico National Guard forces for state and national emergencies.  While in this position BG Bump was qualified as a Dual Status Commander, certified to command Title 32 National Guard and Title 10 Active Forces in response to a homeland emergency.  In this assignment BG Bump was also in integral part of critical state level programs such as the Sexual Harassment Assault Response Prevention Program that was nationally recognized by the Department of Defense in 2018.

During his 33 years of service to his country Brigadier General Bump consistently applied the leadership, integrity and devotion to duty that reflects on his experience at New Mexico Military Institute and our credo of Duty, Honor, Achievement.